Electricity is actually made up of extremely tiny particles, called electrons, that you cannot see with the naked eye unless you have been drinking. --- Dave Barry
Posted by Keith Johnston at 18:37

Has abybody else noticved that Esso petrol and diesel pumps at retail forecourts in the UK are now branded Esso Energy?

Something tells me Esso are preparing for life selling electricity as fuel.... 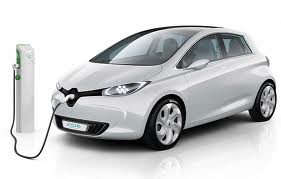 I have been saying this since the Zoe concept was first shown: I believe it is the model that will take electric cars in to the mainstream. When Renault announced a price of £13,650 for the UK after incentives (plus battery lease), I felt more confident. Now I have just read that next year the production capacity of the Zoe will be 150,000 units. Wow.

To put that into perspective, Nissan will have a 2013 capacity of 25,000 for the Leaf. OK, so they come from the same automotive group, but that is pretty independent thinking. 150,000 is nearly four times the global sales of electric vehicles last year and almost certainly more than this year's total global sales.

Now, we need to put in place the parking and charging infrastructure,  but that's another matter altogether!
Posted by Keith Johnston at 18:33

EV Update report on Shenzhen in Southern China. The city recently announced that it planned to deploy  1,000 electric buses and 500 electric taxis this year, all manufactured by Chinese automaker BYD.
City authorities also plan to incentivise private EV users by offering reduced electricity prices to EV owners. Southern Power Grid will  install two free chargers for every EV owner in Shenzhen — one at the driver’s home and one near his/her place of business. Now that's impressive.

In addition, the city has pledged to install over 6,000 new charging stations in 2012. On the flip side, users of gasoline-powered cars in Shenzhen are set to face a carbon emission fee. Wow. Carrot. Stick. Nice.

US and Germany vs Japan: rapid charging

Audi, BMW, Chrysler, Daimler, Ford, General Motors, Porsche and Volkswagen have agreed to standardize a single-port rapid DC charging approach, with a Combined Charging System, (Combi) for use on electric vehicles in Europe and the United States – bypassing the CHAdeMO charging standard already used by Japanese cars including the Nissan Leaf.
The combined charging system agreed by the European and American automakers   integrates one-phase AC-charging, fast three-phase AC-charging, DC-charging at home and rapid DC-charging at public stations, all in one vehicle inlet. The automakers says this will allow customers to charge at most existing charging stations regardless of power source and may speed more affordable adoption of a standardised infrastructure. The first vehicles using this technology will be launched to the market in 2013, the companies say.
The International Society of Automotive Engineers (SAE) chose the Combined Charging System as its rapid-charging method; the standard will be published this summer. ACEA, the European association of vehicle manufacturers, has also selected the Combined Charging System as its AC/DC-charging interface for all new vehicle types in Europe beginning in 2017.
The eight automakers say the plug will standardise charging across the US and Europe, reducing development and infrastructure complexity and cost-of-ownership for customers. However, GreenCarReports.com writes the plug is incompatible with current Japanese models that use the CHAdeMO charging system. In March 2010, Toyota, Nissan, Mitsubishi, Fuji Heavy Industries and Tokyo Electric Power all agreed to CHAdeMO as the standard for electric vehicle recharging stations. 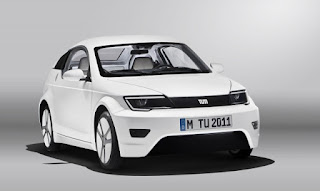 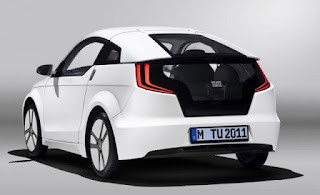 MotorAuthority.com reports that while normally the strongest of rivals, German auto giants BMW and Daimler have joined forces to help come up with the design for the electric car of the future.
Most approaches towards electric car design has so far led to vehicles that either are too heavy and too expensive or fail to meet standard safety requirements for new cars. Now, BMW and Daimler, together with scientists at the Technical University Munich (TUM), are attempting to develop concepts for electric cars that are efficient, safe, and inexpensive.The parties have formed the joint research project ‘Visio.M’ and have received over $14 million from the German Federal Ministry for Education and Research (BMBF).The goal of Visio.M is to explore how the price and safety of small, efficient electric cars can be brought to a level enabling them to achieve a significant share of the new car market. A basic concept has already been theorised: a small hatchback weighing just 880 pounds without its battery and propelled by an electric motor rated at just 20 horsepower and a top speed of under 50 mph - in other words a category L7e heavy quadricycle - perhaps this will be the true heir to the G-Wiz. 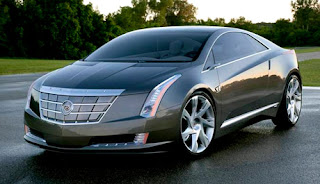 Due for launch in N America in 2013 and Europe and Japan in 2014, the Cadillac ELR drophead extended range electric car is based on the Volt/Ampera. Nice styling.
Posted by Keith Johnston at 08:44