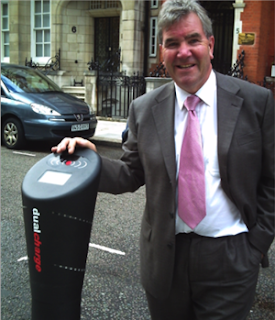 UK charge station manufacturer Chargemaster plc is raising £6million when it lists this month on the AIM market, giving it a market value of around £32million.
Led by chief executive David Martell, Chargemaster now has 6,000 charging points at supermarkets, offices and homes in the UK and Europe, mainly France and the Benelux countries. Chargemaster recently overtook Elektromotive as the UK's leading EVSE (electric vehicle supply equipment) vendor and had planned to acquire Elektromotive as part of the IPO, but this is no longer the case.
Last year Chargemaster posted £3.6million revenues and £1.24million profits.
The press release states: The UK and European markets for plug-in vehicle charging equipment are driven primarily by three factors; the European regulatory framework which imposes significant fines on car manufacturers that fail to meet stringent new emission targets driving them to bring out a new range of plug in vehicles ,infrastructure deployment by manufacturers and dealers to support this new EV introduction, UK and European government EV infrastructure funding programmes, and underlying market adoption of plug-in vehicles. In January 2013 the European Commission ("EC") announced targets of a total of 795,000 charging points installed by 2020, at an estimated total cost of €8 billion across the EU; the UK specifically has been targeted to have a total of 122,000 charging points installed by 2020.

European governments are forcing motor manufacturers to produce more low emission vehicles by stipulating stringent EC emissions targets which begin in 2015. Regulation, the historic driver of change within the automotive industry has set emissions targets of 130gCO2/km in 2015 falling to 95gCO2/km in 2020. As an example, the emissions of a typical family car, such as a Ford Mondeo 2.0 would trigger a fine for the manufacturer of as much as €4,000 were the car to be manufactured in 2020.

The Company believes that, in the short term, government incentives and new car emission requirements will be the major driver of demand for EV charging points, whilst in the medium term market adoption of EVs will become the dominant influence, and government incentives are likely to be progressively withdrawn. In order to reduce greenhouse gas emissions from road transport, many governments globally, including the UK Government, have set targets to substantially increase the adoption of EVs, with the objective of global EV sales totalling at least 5.9 million units per annum by 2020. By 2050, the UK Government envisages a significant proportion of all cars and vans to be zero emission vehicles.

The UK and other European governments provide direct subsidies for the purchase of certain EVs. These directly lower the capital cost of EVs to the consumer, therefore making them more cost competitive with other vehicle types that do not benefit from such subsidies. Similarly, governments are introducing grants to help improve the existing charging infrastructure with the UK government committing £37 million to support charging infrastructure growth in March 2013. The UK Government is subsidising up to 75% of the cost of a new domestic charging point as well as supporting the rollout of a national network of rapid charge stations, workplace charging units and a network of charging stations located in railways stations.

· Home charging: The majority of charging of EVs is expected to take place at home. Chargemaster manufactures a popular home charging unit in Europe, which is supplied to Nissan, Renault, Vauxhall, Toyota, British Gas, EDF and Volvo. It is an attractively designed unit with charging rates of up to 7kW allowing cars to be fully charged in around three hours, and is installed either in customers' garages or outside on their driveway.

· Workplace charging: Chargemaster has a popular range of charging units designed for workplace use. Access control can be by RFID card or by key switch and the units may be conveniently mounted on a wall or post mounted.

· Public charging: Chargemaster's range of public charging units charge an EV at a rate of up to 22kW allowing cars to be fully charged in around an hour. The Company supplies units that can be mounted on car park walls or post units installed on streets and car parks.

· Rapid charging: The Company distributes rapid charge units manufactured by Nissan providing up to 50kW AC and DC charging to appropriately equipped cars. These are typically installed in public places and can charge a car in as short a time as 30 minutes.

In addition, Chargemaster provides installation, service and maintenance support for all charging posts.

Chargemaster's various commercial and strategic relationships ensure the Company is able to benefit from EV and plug in car sales within the private sector, as well as provide local councils with a charging infrastructure. In May 2013, Chargemaster received an order to supply charging points to accompany the UK launch of the Renault Zoe.
Posted by Keith Johnston at 16:55